What Is The World Wide Panorama?

The World Wide Panorama (WWP for short) is a non-commercial collection of interactive panoramic photographies, or VR Panoramas. This growing gallery has been around since 2004, and as of 2020 contains more than 8900 panoramas by more than 1200 photographers, organized in almost 70 events so far.

The WWP is theme-based; every quarter of the year a theme is announced and the participating photographers take a panorama within a limited time frame that shows their interpretation of the theme.

What Are VR Panoramas ? 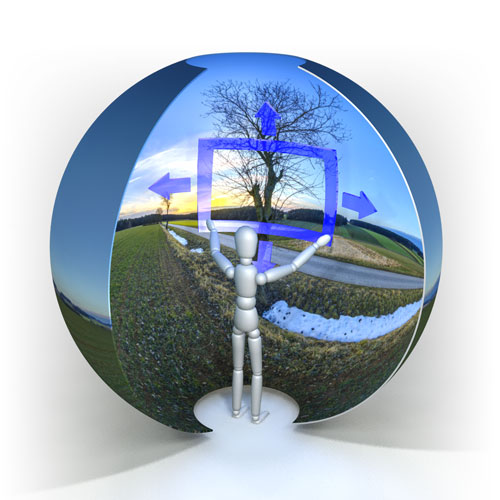 A VR panorama (VR for virtual reality) is a specially created computer image that goes all the way around the viewer. It is a revolutionary way to document a particular place and time - the next best thing to being there.

VR panoramas are interactive. Use the mouse to rotate the panorama, use the mouse wheel or Shift and Control to zoom in and out. Some VR panoramas are cylinders, 360° around but with limited vertical view. Others are cubic (or spherical), with a view that can go straight up and straight down, as well as all the way around. There are also VR objects, where the viewer circles around an object of interest.

For all events we offer content viewable in all modern browsers, desktop and mobile. Could be there are single contributions that crash on mobiles due to memory problems.

History of the Idea - The Wrinkle In Time

The idea began back in December of 1997, when Robert Abbett (Rabbett) in Hawaii suggested a simultaneous VR shoot. It was very spontaneous, the whole thing got organized in a couple of weeks. We all shot at the same exact moment - late evening in Europe, middle of the day in the U.S., morning in Hawaii, before dawn in Australia. It was a fascinating snapshot of the world, offered up by the interesting people who made up the VR community back then (we were almost all basically beginners).

Rabbett named his event The Wrinkle in Time. The first event fortuitously occurred on the Winter Solstice, so he organized another for the next big date on the natural calendar, the Spring Equinox. The second Wrinkle was more organized, but just as much fun.

There were more Wrinkles (Caroling Geary documents a total of 13), culminating in the Millenium Wrinkle, shot on January 1, 2000. Many thanks to Rabbett for the great idea and all the effort that went into the series of Wrinkles he organized.

Why Do It Again?

Virtual reality photography (QTVR and similar) has been around for about nine years now. Collectively we have published tens of thousands of wonderful images on web sites. Yet I am constantly meeting people who have never seen a VR panorama before. They are always impressed with what I show them, often wildly enthusiastic.

So we need to get the word out - this is important work! Immersive imagery is virtual travel, real geography, genuine art, and great entertainment. It is a glimpse into other people's lives, a look around in places we have never been and may never go. It can be unique personal views of the world or dispassionate photojournalism. It deserves to be seen by more people.

Back at the time of the original Wrinkle the VR photography world was smaller. We almost all used the same computer (Mac), software (from Apple), and communicated through the same list (quicktime-vr@lists.apple.com). Now the community is fragmented into many specialties and technical varieties: pros and hobbyists and newbies, commercial and educational, PanoTools and Stitcher and QTVRAS (and many others). It has been nice to get together again, just for the love of creating striking and meaningful VR images.

Aside from the community of producers, there are the consumers, the huge numbers of people who enjoy VR images on the web and on CD's. As an educator myself, I particularly value panoramas for the way they can show us people and places around the world, their diversity and commonality. I remember images from the first few Wrinkles that included a cozy dinner table in Scandinavia, Rabbett's favorite beach in Hawaii, the pre-dawn darkness in Singapore, even inside a refrigerator!

This World Wide Panorama web site is a very democratic statement - anyone who wanted to participate and managed to generate a useable panorama was included. This was part of the vitality and human interest of the early Wrinkle in Time projects. Many of the leading professional VR photographers also participated in the World Wide Panorama, contributing images of consumate craft and artistry.